Finally it’s here! After what seems like forever the self titled ‘McBusted’ hits store’s shelves on Monday 1st December. 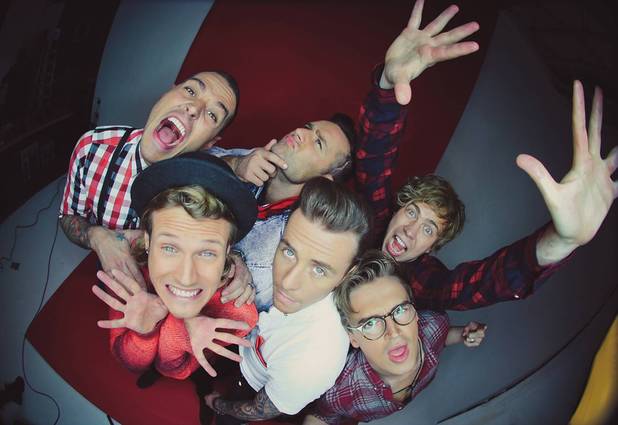 It’s safe to stay that the album is a hit. The album has seemed to perfectly captured the perfect balance between McFly and Busted. Although many of the tracks, including ‘What Happened To Your Band’ and ‘Riding On My Bike’ where penned many years ago by the Busted head writer James Bourne, the vocals that the whole band put on them bring them alive as McBusted. It’s not just McBusted James has been busy writing for, he has recently penned songs for The Vamps and 5 Seconds of Summer, who both claim that McFly and Busted are ‘huge influences of theirs’.

This album made Dougie’s dream come true, where he was able to write with his idol, Blink 182’s front man Mark Hoppus, who co-wrote ‘Sensitive Guy’ and even put his vocals to ‘Hate Your Guts’. Although, not all of Dougie’s dreams came true, It was recently announced in an interview, that if Dougie had his way with naming the album, it would be called ‘Hot Single Guys In Your Area’. Better luck next time Doug.

It was also announced this week in Tom Fletchers Vlog that the boys Tour DVD titled ‘Tour Play’ is number one in the DVD Charts. The boys will be hoping that the Album will follow suit.

The track listing for the album is as follows:

3. What Happened To Your Band

5. Riding On My Bike

8. Beautiful Girls Are The Loneliest

9. Before You Knew Me

McBusted have just filmed the music video for their next single off the album ‘Get Over It’, which the band penned with All Time Low’s Alex Gaskarth.