Only two are left for tomorrow's finale!

Andrea Faustini has been eliminated from the competition coming in 3rd place. 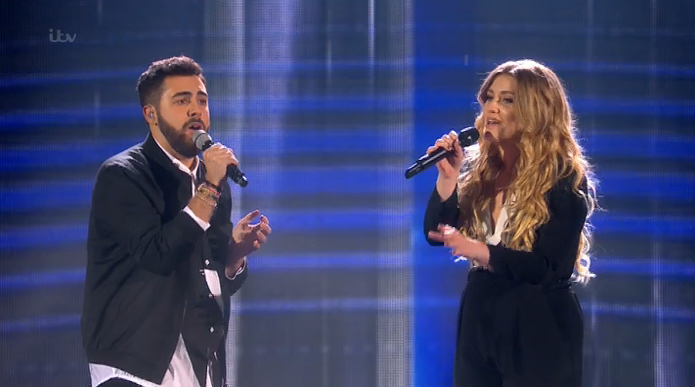 The X Factor 2014 final is officially here and it’s been dramatic with one of the judges, Mel B in hospital.

Take That were the first celebrity performers of the night with ‘Rule The World’.

First to the stage was Ben Haenow with Demons (originally by Imagine Dragons). Simon said: “I remember that first audition. Like the girls said – I’ve seen you grow throughout the competition, but you have remained a down to earth, family guy.

“You’re not going to forget your roots”.

Second up was Andrea Faustini with Feeling Good (originally by Nina Simone), step-in judge for Mel, Tulisa said: “Your voice is so amazing, I feel like I want everyone listening to you tonight to go back to the first time they heard you. You’re so good,”

“I almost want people to listen to it like they’re hearing it for the first time again and realise how epic your voice is”.

Third up was Fleur East with Can’t Hold Us (originally by Macklemore & Ryan Lewis). Mentor Simon said: “For 10 years and probably before that, as a little girl you had a dream of being a singer and a performer. It didn’t work out, you nearly didn’t come back after the first audition, and over the past two weeks, I’ve seen you transform into someone really, really special.”

After the finalists sung their solo songs, it was time for the duets:

Lines then frozen after the finalists sung both their songs. The result was then announced and only two of them made it through to tomorrow’s show.

Leaving the competition in 3rd place with the lowest public votes of the night was Andrea Faustini.

The two finalists who made it through to the final show tomorrow were Fleur East and Ben Haenow.

The X Factor 2014 Final returns tomorrow night (Sunday) where the winner will be announced.