Bear Grylls smashes through ITV’s This Morning set for interview about ‘Mission Survive’!

Bear Grylls made a dramatic entrance into ITV’s ‘This Morning’ set for an interview about his new celebrity TV show, ‘Mission Survive’. 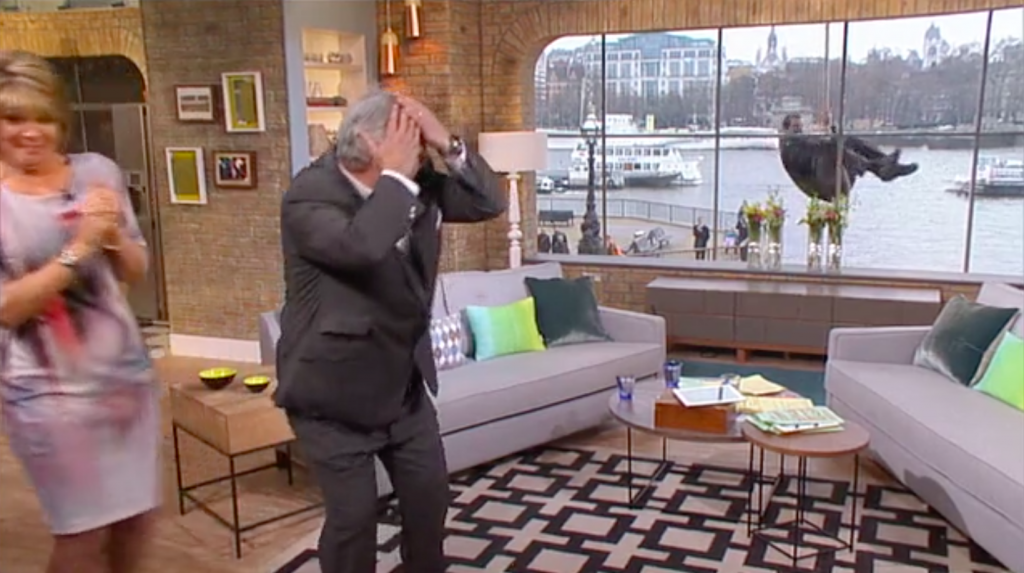 Appearing as a guest on This Morning, Bear Grylls crashed through the studio windows directly onto set as hosts Eamonn Holmes and Ruth Langsford presented the live programme.

Viewers had earlier seen him steer a Zodiac Inflatable Raiding Craft (IRC) up London’s River Thames as he was escorted to the studio by Reservists of the Royal Marines Reserve City of London Unit of which Bear is an Honorary Colonel.

In typical style, Bear leapt from the boat, ran up the bank of the River Thames to the building and climbed a rope up the side of the ITV Studios before crashing through the glass directly onto the set.

Bear said he stands by the phrase ‘what doesn’t kill you makes you stronger’,

“I think as a general principle in life, we come alive when we are challenged and when we come through things.”

Watch the clip of Bear smashing into the studio below:

Bear when talking about his new TV show Mission Survive said, “There is no blueprint for a hero. I’m searching for the ultimate survivor – if my kids were stuck in the jungle with no one and I wasn’t there, who would I want beside them. And these guys, I took eight celebrities who had never done anything like this before, but I said it’s not about where you start, it’s about where you finish. And [I said] I will train you, empower you, we’ll set you challenges, we’ll do this big journey.”

He added, “Every couple of days I’m sending home the person that I believe would – if we weren’t there – then they wouldn’t make it out alive. The jungle has every sort of terrain, rivers to the high cliffs, crocodiles, snakes, scorpions, they had to catch their own food, live off the land, and as the journey went on I started to restrict the amount of gear they had. We start off with eight and by the end, only three of them are on the final bit of the journey… and ultimately I pick that person who I believe will be the guy or the girl that I’d want beside [me].”