The Big Brother house has been transformed into a Fraternity house called Beta Beta for this week’s luxury shopping task. 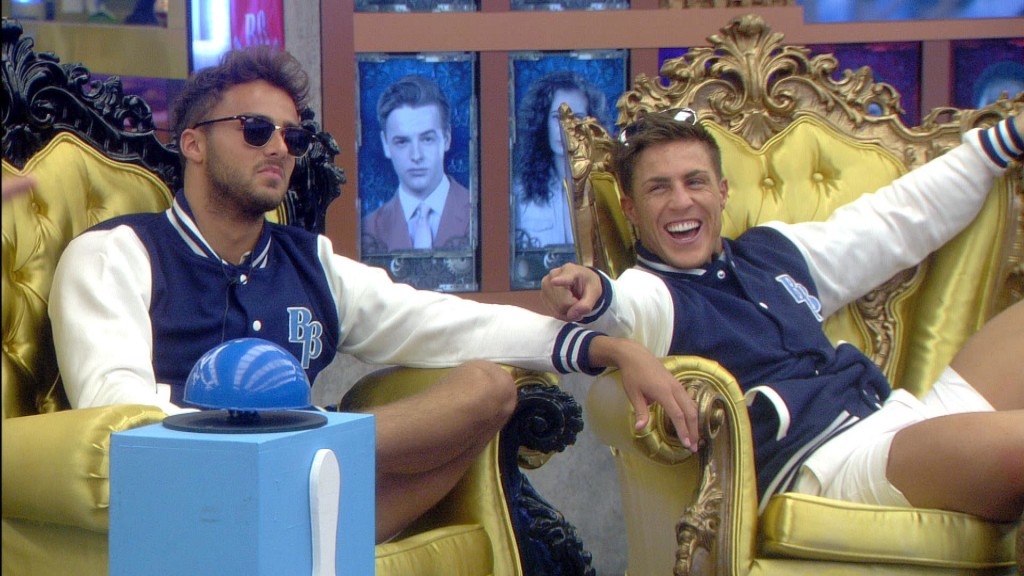 Four of the housemates will be chosen as Brothers while the others will be Pledges. Pledges must earn their place in the fraternity by impressing the Brothers.

In tonight’s show Marc, Cristian, Harry and Nick are members of the Beta Beta fraternity, they are the ‘Brothers’. The other housemates are ‘Pledges’ and will compete to earn a place in the fraternity.

Pledges must obey Brothers’ rules such as, “Pledges must cook all meals. Pledges must clean up after Brothers.” Marc comments, “You have to do whatever I say. It’s right down there in black and white.”

Marc asserts his authority as a ‘Brother’ by demanding that the pledges laugh at all his jokes, stoop down when addressing him and drop to the floor to do press-ups when he tells them to.

Jack, Eileen and Sam are in the kitchen discussing the task. Jack says: “This is going to end in a fight.”

For the second task, the Brothers are being given a toga party. The Pledges must cater to the Brothers’ every needs and serve them without participating in any of the activities.

The Pledges are then given plates of items and must use them however they see fit to impress the Brothers. The Brothers ask them to do things like eat dog food and shave their heads. This wins two more people brotherhood. Danny and Eileen are now Brothers.

As the Toga party is winding down, the Pledges are told that they will be tasked with spying on the Brothers. The Pledges cannot reveal this to the Brothers.

The Pledges are watching Sam and Nick in bed together. Jade comments,:“Nick needs to grow some balls and go in for the kiss.” Harry tells Nick she’s single.

Harry takes her clothes off. “I won’t be able to handle it if you sleep like that” – Nick says.

Big Brother has allowed the Pledges to pick two housemates to secretly question other housemates in the Diary Room. They have chosen Simon and Marc.