Taylor Swift’s Reputation Stadium Tour: How to get tickets, presale, and pricing! 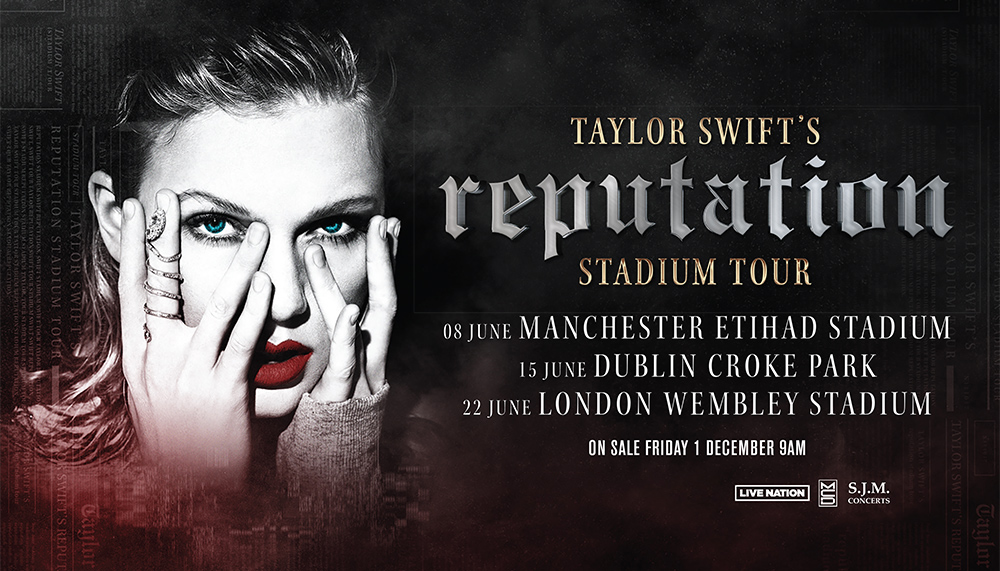 Taylor’s Reputation Stadium Tour is set to arrive in Dublin, Manchester and London.

Taylor Swift’s critically acclaimed sixth studio album, reputation, topped iTunes album charts in 111 countries and debuted at no.1 on the both the Official UK Albums Charts and the Billboard 200 album chart. Selling over 1.29 million copies in the U.S. week of release, it is the highest selling album there this year.

Follow our steps below to maximise your chances of purchasing tickets.

What’s the confirmed dates for the tour?

At the time of press Taylor has only announced 3 dates for the UK and Ireland. It’s expected Taylor will announce extra dates in the coming days as the three confirmed below will sell-out.

The current dates and locations for the Reputation Stadium Tour are:

Tell me the prices? How much?

Seeing Taylor Swift live in 2018 will not be cheap, but it’s going to be an incredible show. Below are the confirmed prices – *Excluding possible fees, and delivery charges.

This is the official Taylor Swift map of the arena for Wembley Stadium (other venues might possibly have a different layout, but it’ll be similar to below).

So, how can I get presale tickets?

Currently two presales have finished, O2 Priority and the Official Taylor Swift Merchandise offer (where Taylor offered fans a chance to buy her new album with a promo code to purchase tickets).

Fear not! There’s some more presales happening on 30th November 2017 before the  general-public sale on Friday 1 December 2017.

Live Nation UK: Live Nation are offering fans a chance to purchase tickets a day before official release by singing into a ‘My Live Nation’ account.

Where can I buy tickets on Friday?

Taylor’s general release will take place on Friday 1st December on many ticketing websites. You can find a direct link to each ticket website below.

Make sure you sign into the websites below beforehand and already have your information including billing information inputted for a speedy transaction.

General sale will start Friday 1st December at 9am.

Come back to this page later the time tickets go onsale for an updated list of official ticket outlets.

What happens if I miss out?

We are lead to believe Taylor will announce extra dates for the UK and Ireland in the coming days, so do not buy from touts or high-priced resellers, use official reseller site Twickets instead.

Tell me more about Tay Tay!

Taylor Swift’s chart-topping first single, “Look What You Made Me Do,” from her sixth album, reputation, broke multiple records within hours of its release. With over 10 million streams, it is the most-streamed song in a one-day period ever, the lyric video for “Look What You Made Me Do” broke the standing record with over 19 million views, while the music video shattered the original most viewed video (28 million) record with 43.2 million views in only 24 hours.

Taylor is a ten-time GRAMMY winner, a singer, songwriter, musician and producer. She is the youngest person in history to win the music industry’s highest honour, The GRAMMY Award for Album of the Year and she is the first female solo artist to win this prestigious award twice.

Rolling Stone listed Taylor as one of the 100 Greatest Songwriters of All Time.

Time magazine has named her one the of the 100 Most Influential People in the world and one of only eight candidates for their most prestigious honour, 2014 Person of the Year.

A Brit and Emmy award winner, Taylor is Billboard’s youngest-ever Woman of the Year and the only artist to have been awarded this honour twice.