Alton Towers has gone out of its way yet again to terrify guests for Scarefest this year, with brand new mazes and family friendly shows. 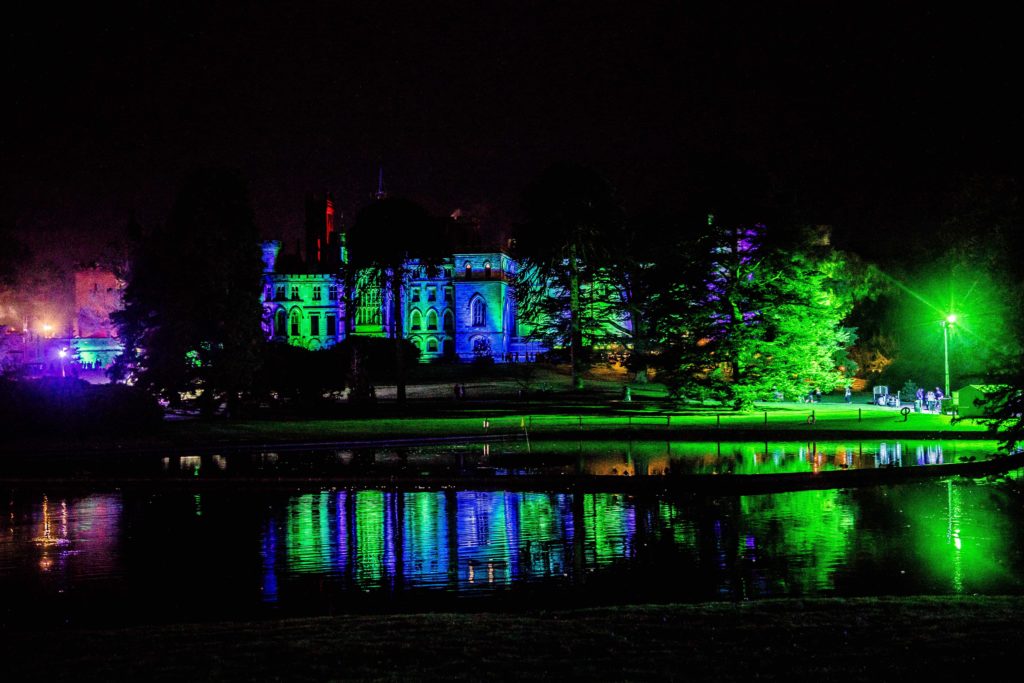 It’s that time of the year where the monsters and zombies come out to play and it seems they’re all hiding at Alton Towers this Halloween, until November 3.

Alton Towers is the place to be this Halloween if you like a good scare – or even just to celebrate the annual event with the family, as there’s something for everyone.

For the adrenaline junkies the park is open till 9pm which means you can ride the UK’s best coasters in the dark.

This year’s Scarefest has seen two new scare mazes added to the line-up, joining last year’s favourites such as Project 42 and Sub Species – The End Games.

Alton Towers exclusively invited TwitCelebGossip to check out the new mazes, and the first one we entered was…

The Attic: Terror of the Towers: The Resort gave us the backstory to the maze before we entered, it read: “The Attic is a live action maze where you’ll discover the ghost of ‘The Governess’. According to local legend, she tries to avenge the death of her charges by taking the spirits of the living as penance – will you be her next victim?” 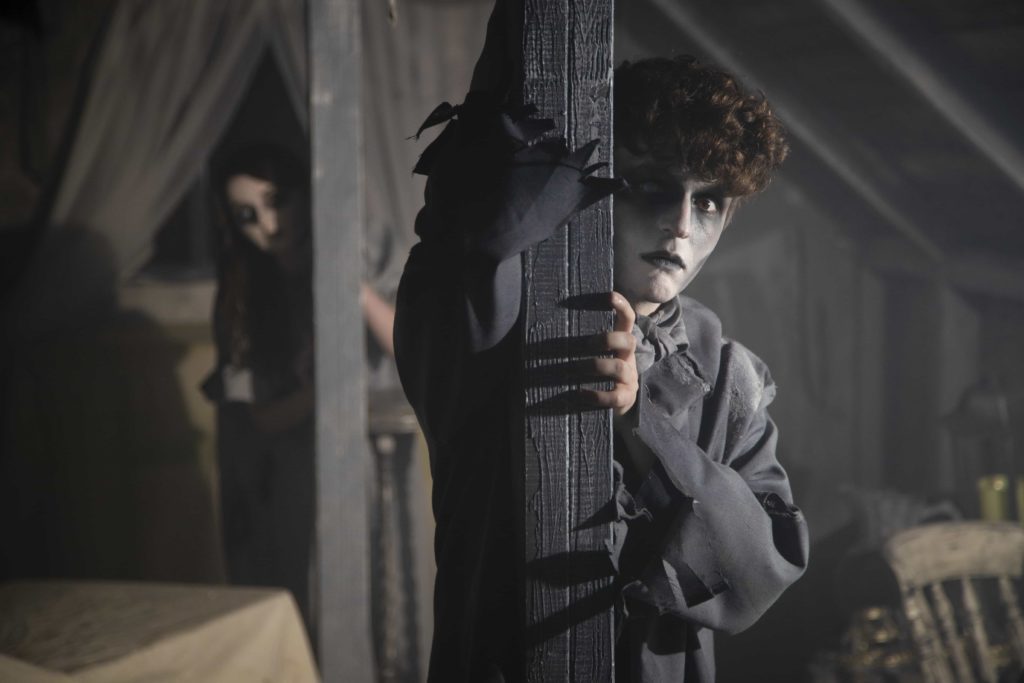 We were amazed with the amount of effort put into the planning and design, with the maze itself well exceeding our expectations and certainly raising the bar for possible future projects with incorporating the Towers. ‘The Attic’ paid homage to ‘Terror of the Towers’ which was the first maze Alton Towers introduced when Scarefest was expanded in 2002.

It was clear that a lot of attention to detail had been made inside the maze, including the queue line which featured various items that could be found inside the house.

Darkest Depths: There’s a replacement for the 2017 and 2018 maze ‘The Welcoming’ in Mutiny Bay, and it’s called Darkest Depths. This terrifying maze lets you board the infamous ghost ship ‘The Mutiny’ and journey into the darkest depths. The treacherous Sirens attempt to lure you into the ocean as you dodge the swords of the mutinous ghost pirates and come face to face with the sea’s meanest legend of all… the Kraken. 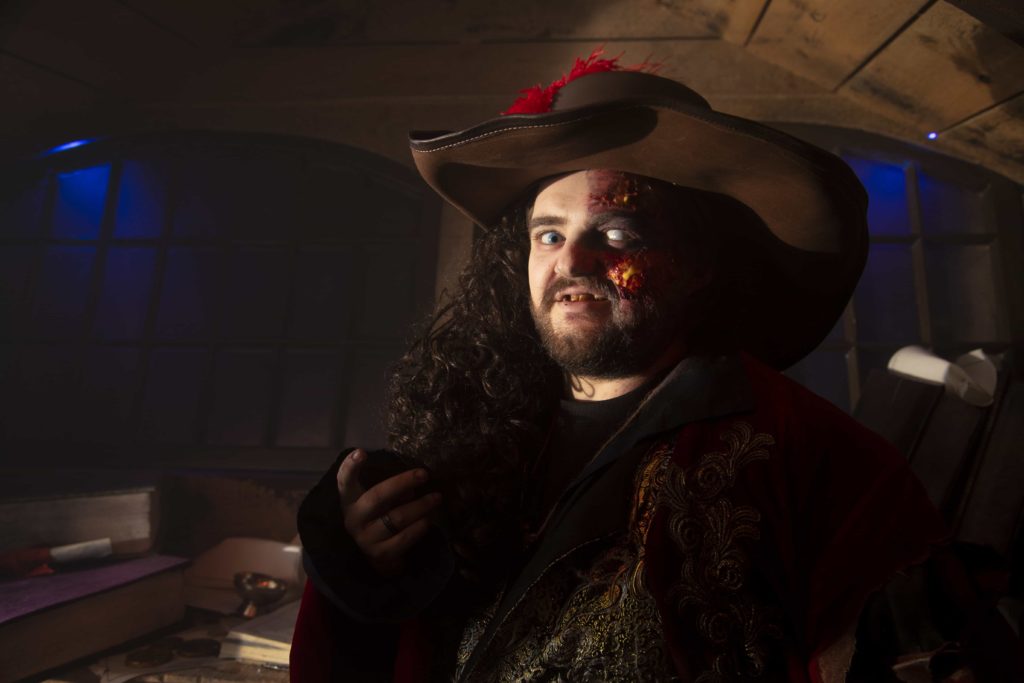 This maze was fully immersive, and it felt like you were actually on a ship. The scents and lighting made it one of the scariest mazes Alton Towers has to offer this year. There was an awful smell of vomit in parts of the maze (definitely intentional by the Resort in case you wondered if a guest had been taken ill), and the way the actors used the set to deliver scares kept us on our toes throughout.

Alton Towers recommends guests aged 8 and above can enter the maze but we think the age limit should be much higher, we were THAT scared.

Project 42: A maze returning from last year’s Scarefest is Project 42, an action-packed scare maze that’s located in Forbidden Valley. The backstory we were given by the Resort read: “The Phalanx base has been compromised and the team is in demise. The base had been used for civilian tests on a unique virus but something’s gone wrong; the test subjects, now infected by the virus, have broken out. The Phalanx requires volunteers to enter the compound, find the vaccination and rescue the technician.” 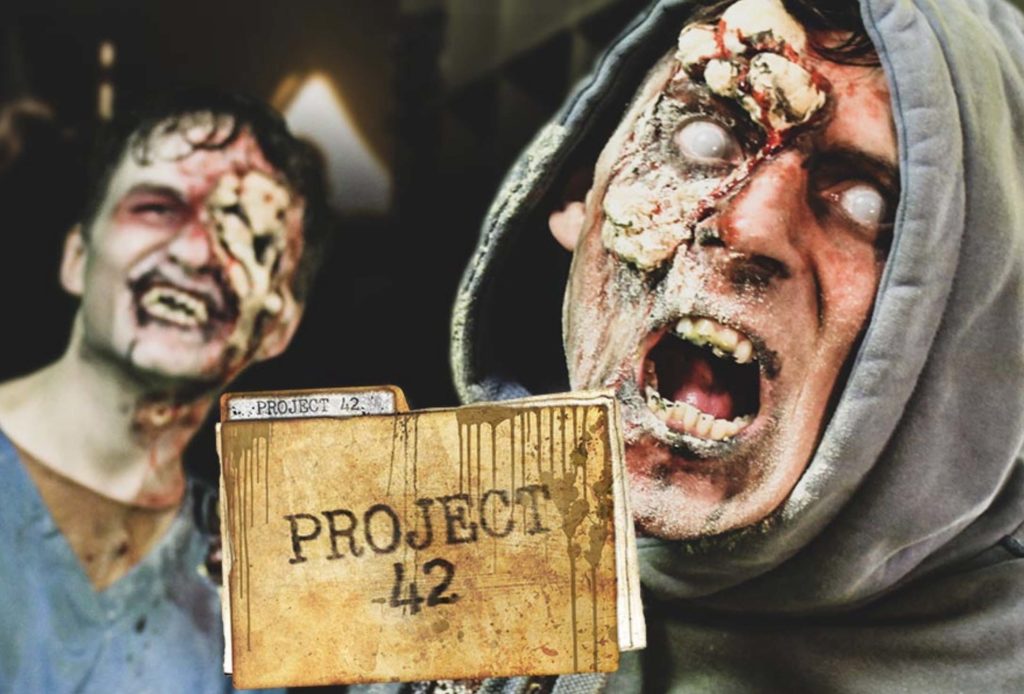 Project 42 left us screaming throughout (the roughly) 10 minute maze. Volunteers have to be at least 15 years old to enter the maze, and be prepared for live actors with disturbing makeup to touch you. The maze has been revamped from last year, and it delivers spectacular scares.

It’s not for the faint hearted.

Altonville Mine Tours – Uncover the Legend of the Skin Snatchers: One of the most enjoyable and fun mazes of Scarefest 2019 is Altonville Mine Tours. You tour the depths of a recently re-opened mine at the Resort, which holds a deep dark secret. Those brave enough can head to ‘Altonville’ and enter the damp, disused mine, which is believed to have once been home to a family of village outcasts. Nicknamed the ‘Skin Snatchers’ by local residents, their spine-chilling secret is about to be unearthed. 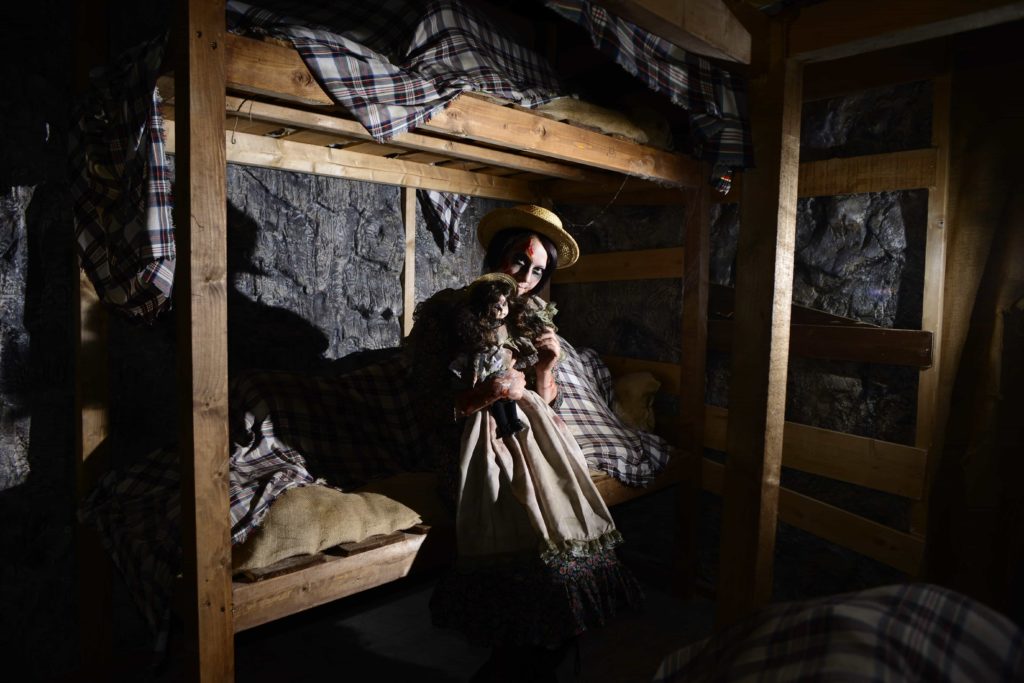 Altonville Mine Tours has received improvements from last year, mainly to the beginning when visitors enter the mine and some new scaring locations inside the tour. It’s a fun and lighthearted maze. We’d recommend to start with this, if you can.

Sub Species – The End Games: One of the most intense mazes to return this year is Sub Species. This maze the creatures WILL touch you, and you’re not allowed to touch them back, Alton Towers is very strict about this. You descend deep underground to a post-apocalyptic sewer system. At the start of the maze you will be split up and you’ll choose your own route in an attempt to avoid a sewer dwelling community. 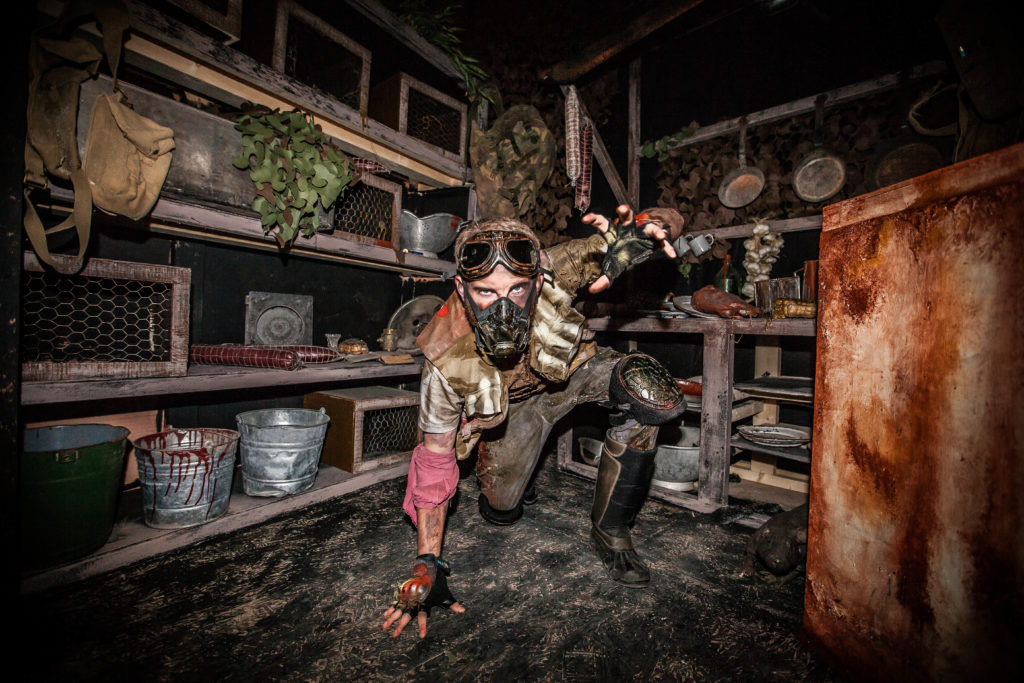 During the maze, you WILL get split up from your party and have to navigate the maze on your own with terror around every corner. Anxiety levels are high as you walk completely lost in the dark, on your own. It’s as bad as it can get, in a good way. Out of all the mazes, this is the one that singles you out and puts you through hell, again, in a good way.

The Alton Towers Dungeon: The Dungeon is an absolute must see when visiting the park and goes hand in hand with this year’s Scarefest, whereby tales of horror and gore are told within to those that dare to delve into the past to learn more about the history of Staffordshire. 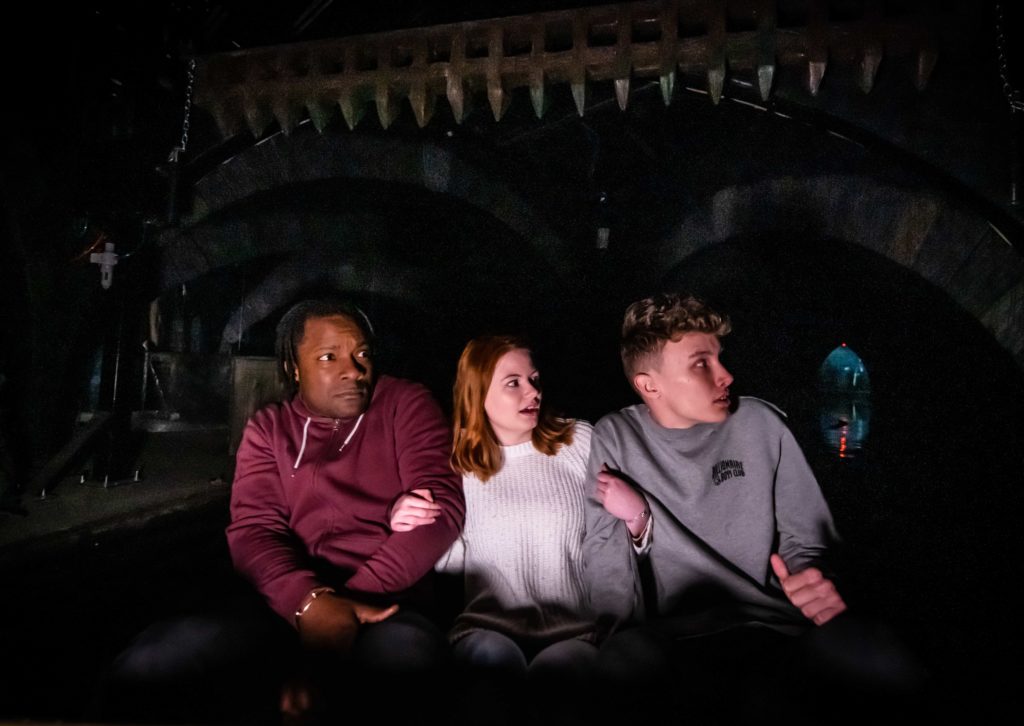 The attraction which opened in 2019, was established following the success of multiple other sites across the UK and was very well received due to the amount of detail put in and interactivity involved, making it highly popular with couples and families.

Scarefest has brought the actors out of the attraction for the first time, keeping the queue to enter the Dungeon very well entertained while visitors wait.

Honorable mention(s): There is also entertainment scattered throughout the park, with the Alton Ancestors rising from the grave to perform energetic dance routines for guests entering the park on Towers Street and in the Gloomy Wood. 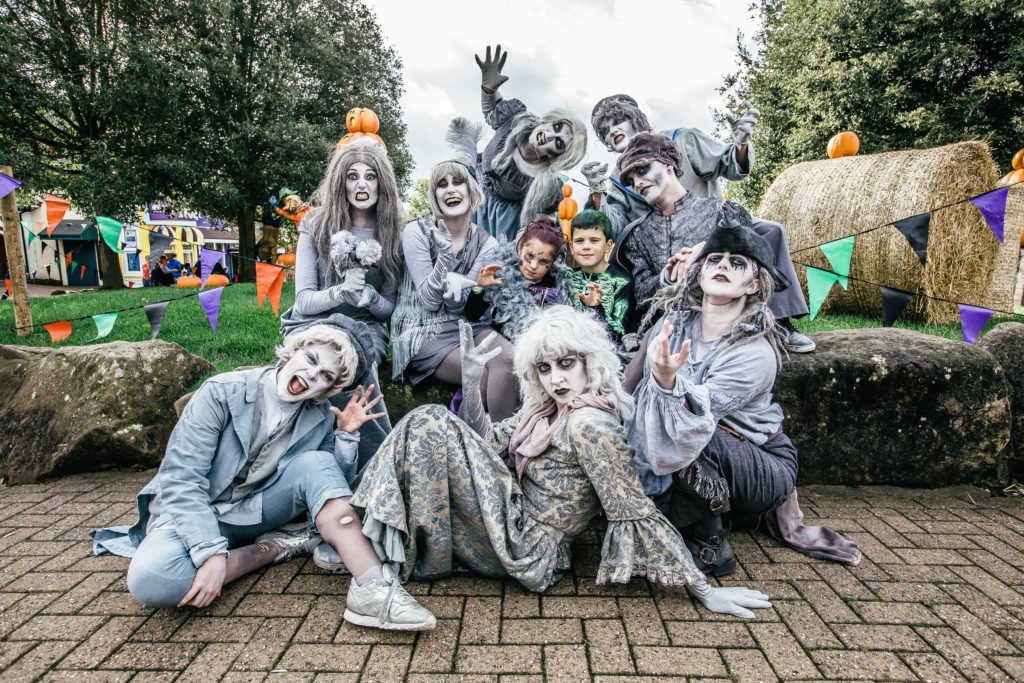 For the little ones, The Freaky Five have also returned this year with their ‘Freaky Fun Zone’ on the lawns at Towers Street. Gretyl, Franklin, Skelvin, Patch, and Phil perform four family-friendly shows at regular intervals throughout the day for all ages. 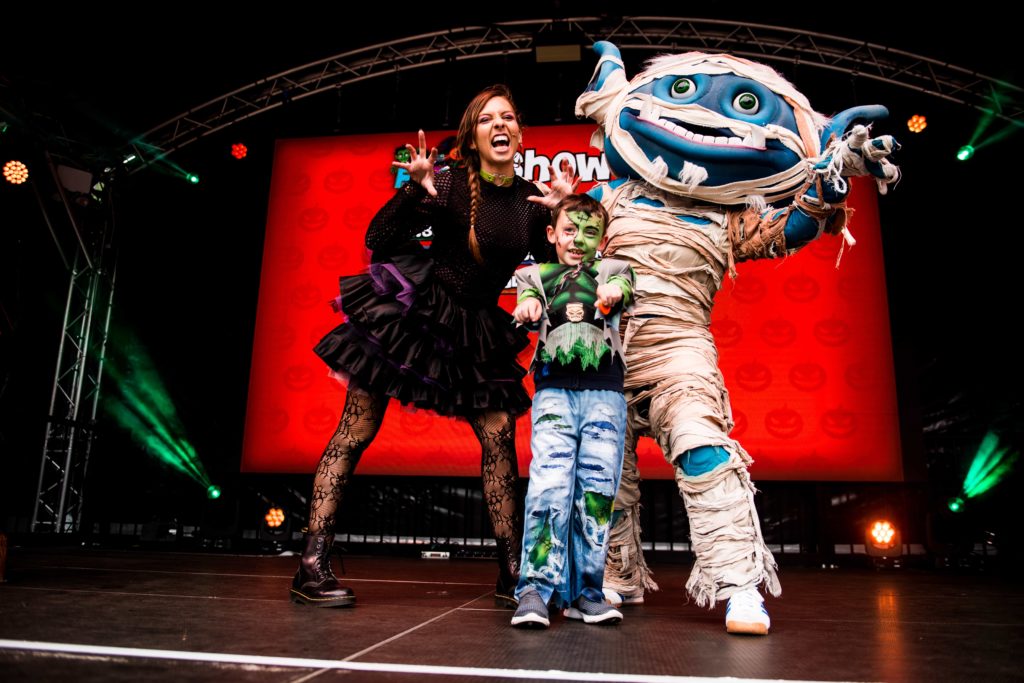 Read our article on everything you need to know about Scarefest 2019, it has tips and tricks to maximise your scares at Alton Towers – It also includes pricing for different maze packages.

Thank you to Alton Towers for an incredible Scarefest 2019 launch on October 5.