Following the success of its Christmas special, a new series of Still Open All Hours will be filmed this summer.

Sir David Jason helped the one-off special of his classic sitcom Open All Hours get 9.5 million viewers at Christmas and can’t wait to film a full series. 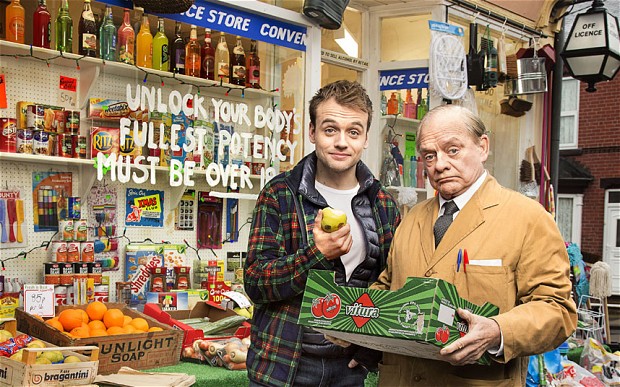 On ITV’s Lorraine, he said: “We’re doing a series of [Still] Open All Hours. We did the Christmas special … I hoped it would work, because I love that style [of television].

“Lo and behold, it got a huge audience, so much so that they said would I be interested in doing this series.

“Immediately I got in touch with the writer, who I know very well, Roy Clark, and he said, ‘Yes I’d love to, let’s have a go, I can’t wait to get on my old typewriter.’

“So that’s what we’ll do, we’re starting to build up to that and we’ll be filming from late August.”

The original show ‘Open All Hours’ starred comedy legend Ronnie Barker, (who sadly died in 2005), as Albert Arkwright the shop owner and Granville as his assistant.

In the new series, Sir David will be running the famous corner shop and his son Leroy (James Baxter) will be his assistant.

However, Sir David confirms Only Fools and Horses will not be returning, despite the one-off sketch starring himself, David Beckham and co-star Nicholas Lyndhurst, which was filmed for Sport Relief. This is because the show’s writer John Sullivan died in 2011.