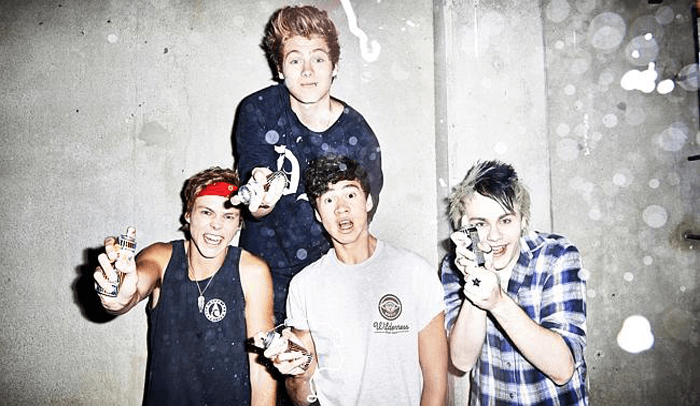 The album contains 17 of the bands best songs off their new self-titled album, live! Including the bands first number one single ‘She Looks So Perfect’ and other huge hits such as ‘Amnesia’ and ‘Don’t Stop’.

The band took to Twitter to announce their debut live album, Ashton tweeting ‘This is so important to us… it’s my favorite thing we are releasing to date. #LiveSOS’. While Luke and Calum took a more humours approach where they sang their most recent single ‘Good Girls’ in a Keek with the cheeky caption ‘#LiveSOS hope you guys love it’.

The band have released the album after announcing their ‘Rock Out With Your Socks Out’ 2015 Tour, where they are set to play large arenas around the UK, Europe, Australia and America. Tickets have already gone on sale, where they have sold out most of the dates.

The live album is bound to be a massive hit after their debut album sold 259,000 copies in its first week.

The album also contains ‘What I Like About You’ a previously released song that does not feature on their studio album, however it is incredibly popular with the fans shown by it being their song choice at the AMA’s on Sunday, where they preformed it after winning the award for the ‘Best New Artist’.

The live album will be available to pre-order from midnight tonight(Sunday 23rd November), with the release date being the 15th December.